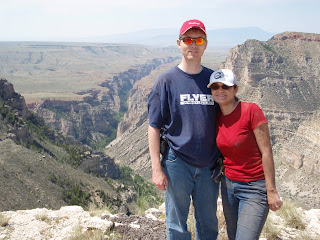 Trevor and I spent July fourth this year four-wheeling in the mountains with his family. I'd never ridden a four wheeler before, and it was fun, despite the fact that it was on rugged roads with no helmets and riding 2-3 to a vehicle, exactly as the instructions tell you not to do. The lawyer in me was cringing quite a bit.

On our way up the mountain I saw my second ever bear in the wild. It's funny because I've lived my whole life in the American west and the first time I ever saw one was in my parents' subdivision, about a week before. He was a little scrawny guy who'd been eating people's garbage and has since been taking by the Dept. of Game and Fish to be fattened up and relocated. This bear, that we saw in Wyoming, was just trotting along towards the road. At the sight of us he stopped, started, then turned tail and ran, soon disappearing behind a rise. That happened so fast that I couldn't be sure of what I'd seen. My initial thought was that it was a dog, but given where we were, I knew that was unlikely.

Fortunately, he (she?) came out from behind the rise to continue on up the hill, which was covered with grass and no trees, so we could see him fleeing for quite a while. That's the longest bear sighting I've ever had.

The picture is Trevor and I once we reached an area near-ish to the peak. It had a lovely overlook, as you can see.
Posted by Emily Mah at 2:56 PM