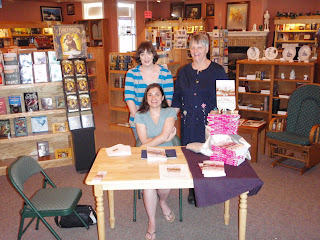 I finally got pictures from my signing uploaded on my computer. To the left is a picture of me with the staff of Words of Wisdom Bookstore, who were wonderfully kind and attentive. Below is me and Trevor, my husband.

The signing was on Saturday, June 28th, which was the lowest traffic Saturday they'd had in a long time. It was the beginning of a holiday week, the temple closed that day, and it was a signing, and those are often jinxed (and I'm a new writer no one's ever heard of before.) 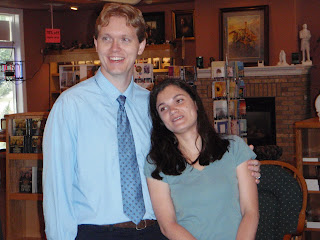 However, in the week to follow Trevor and I did manage to nearly double the store's sales of the book. I took a boxload of copies down to Wyoming to have on hand during some readings and talks that I did. What I thought would be plenty of copies all sold out in about five minutes at the first event, so I got through the rest of the week with copies my mother-in-law had bought. She let me sell those on and I bought her replacements when I went back to Words of Wisdom.

By the way, Trevor and I are dressed up because we'd just come from the temple, which was down the street.
Posted by Emily Mah at 8:23 PM