Why I have the best in-laws ever

I didn't blog this weekend because I had houseguests. Trevor's mother and two sisters came out to set up the nursery - by "set up" I mean transform it from a plain storage room into a beautiful place. Here are some of the before pictures: 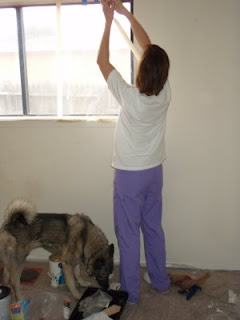 This is Trevor's sister, Tara, taking the insulation plastic off the window, and Jakob helping as usual by sniffing things. 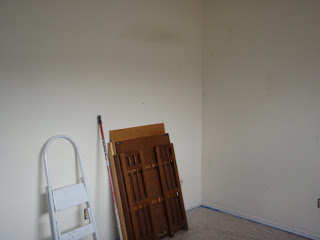 This is what the room looked like. Plain beige walls that were rather dingy because the paint was old. 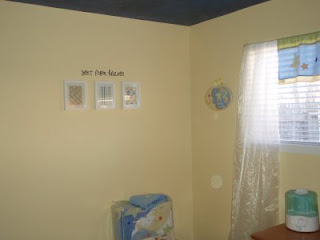 And then here's an after picture of that same corner, but the best part is below. 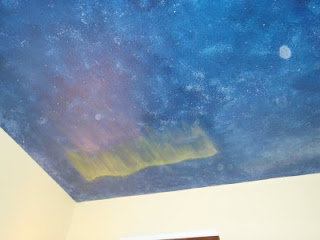 Above and below are pictures of the ceiling. That is all original art that they did, a gorgeous night sky mural. Above is an aurora borealis and below is a moon and comet. Trevor helped design the moon and wanted to do a comet, but ended up not liking it. I had to beg him to keep it, because I think it's neat looking.

The stars were done in glow in the dark paint, as was the moon and little streaks in the aurora. The effect is gorgeous. 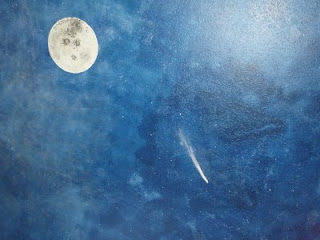 And below is the work crew, from left to right: Tara, Teddie, and Tianne. Teddie, if you can believe it, is Tara and Tianne's mother and my mother-in-law - and no, not all of Trevor's family have name's beginning with "T". It's kind of a fluke that we had all of them out this weekend. Behind them is a star they hung on the wall which, at night, provide the perfect level of illumination to let you see to change a diaper, but not over-stimulate a sleepy baby. 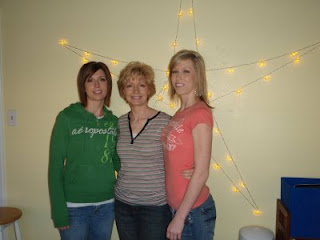 To give you an idea of how ridiculously generous Trevor's family is, they did the whole nursery, brought shower gifts (I would think a nursery would count as the ultimate shower gift???), put away all of the shower gifts and other baby stuff in the closet, reorganized another storage closet, and when I went to take a nap Sunday afternoon, they set up a bookshelf and shelved all of the books that I was very slowly moving from one room to another. I'm a writer. These were huge piles of books. Tianne also made the baby a handmade hat in her "spare time".

We tried to show our gratitude by giving them some gift cards and taking them out to lunch. I wanted to feed them more, but then my mother went and prepared a bunch of homecooked meals for them which she delivered and served up in our home. Suffice it to say I feel rather loved, and overwhelmed.

Oh, and yeah, my father-in-law also made us a crib and dresser/changing table that the family will drive down. He's a professional woodworker. 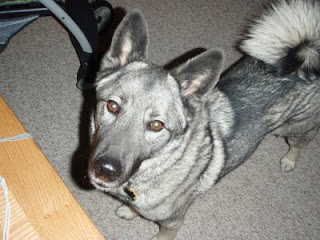 Jakob actually behaved this weekend, I think. I know most dog owners lack perspective, so for all I know he was a total nuisance, but people assured me he was very sweet and mellow and didn't stink too much.
Posted by Emily Mah at 9:38 PM