Jeff Bezos is reading Leviathan Wakes, and so should you!

So, of all the random coincidences, this one is pretty cool. Jeff Bezos announced the release of the Kindle Fire today, and during his demo, he waved his own Kindle Fire around, like this: 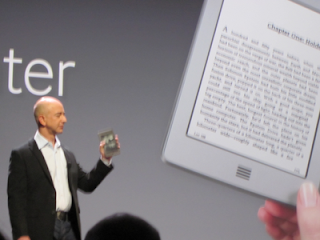 And there, on the screen behind him is a Kindle, displaying chapter one of Leviathan Wakes (The Expanse)

. The author of this book is James SA Corey, who doesn't actually exist. This is the pen name for Daniel Abraham and Ty Franck.

I introduced these guys to each other. Daniel and I were in the same writer's group for years, and Ty and I met at a science fiction convention in Los Angeles. Ty came to visit me in New Mexico, met the rest of my writer's group, and wrote an rpg for them that they loved so much that Daniel asked Ty to cowrite a novel based in the game with him.

And yes, the book is good too. I haven't read the published version, but the rough draft was better than a lot of what you'll find out there.