When equipment breaks, one must be creative

Mail delivery between the UK and US appears to have ground to a halt. For example, a friend of mine is still waiting on some documents that were sent from London on Dec. 16. I sent jewelry to the last FB giveaway winner, Ann, just before New Year's, and it hasn't arrived. Now, I do not like my customers waiting this long. It makes me every bit as annoyed and nervous as it makes them, so I decided to send a chaser package, one of my rosette necklaces in a custom color, to her to see how long that took. If it arrives with still no sign of her other package, then we know the package is lost. If it too disappears into the abyss, then we know that both packages are likely held up in a warehouse somewhere.
As luck would have it, though, my tumbler has broken down. I've uploaded some pics of what my tumbler looks like. This is the barrel: 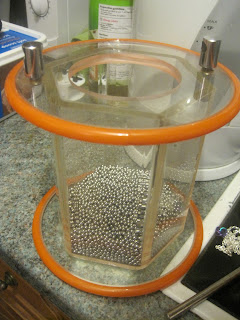 That's stainless steel shot in there, and the barrel has flat sides so that it throws the shot into the air as it rolls. The tumbling shot hammers, polishes, and hardens the jewelry. This hardening is essential for my chain maille, because the rings are still fairly soft after I've worked them, and I don't want them to lose their shape. I put Ann's necklace in the barrel with the shot, some water, and some plain dish soap with no additives. Normally I would then put the barrel on its motorized base, which would then spin the barrel back and forth for about an hour. 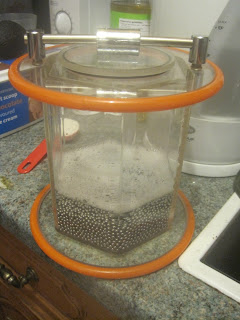 But like I said, the motor part broke down. The manufacturer is going to repair or replace it, but they need to send it up to Birmingham, and that will take at least another ten days. Soooo, I put the barrel down on the floor and recruited some help to roll it around.﻿ 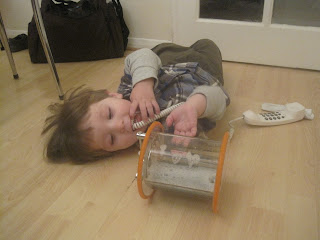 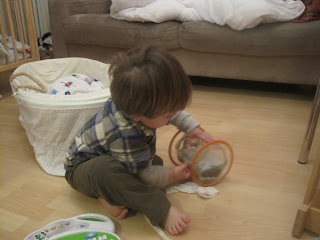 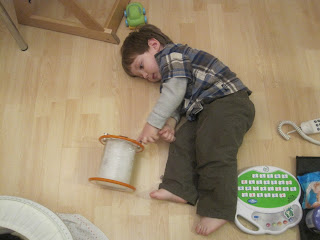 It worked, until my little helper wanted to pick up the barrel and throw it. The necklace is polished and hardened and will go out in the mail tomorrow.
Posted by Emily Mah at 4:51 PM