Our old neighborhood and our new home

So I've posted pics of our old apartment, now I'll post some of our neighborhood. We lived right next to West Ham station, which has Underground, Overground Rail, and Docklands Light Railway. This was also the station that was used for the London 2012 Olympics. 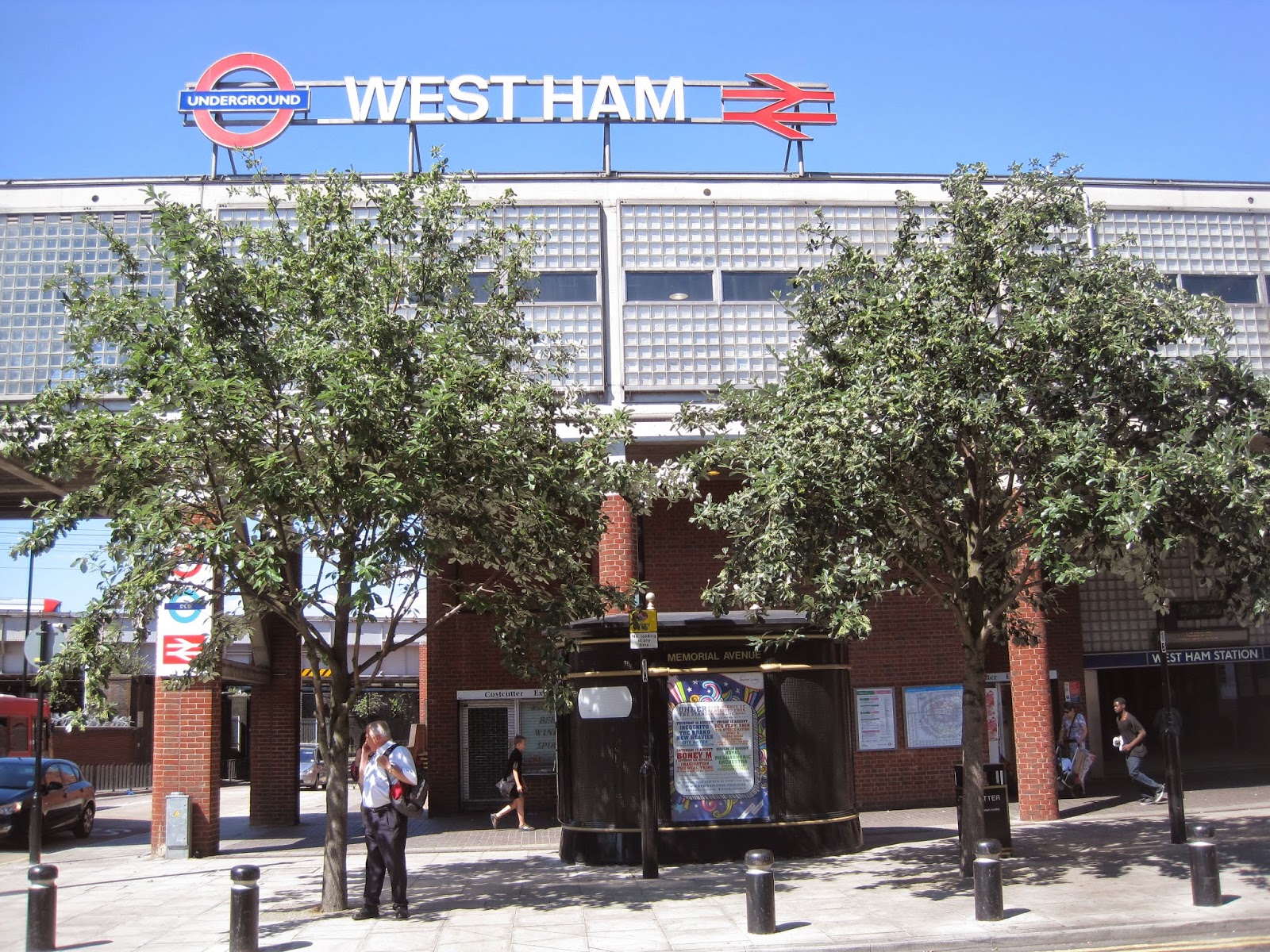 Anyone traveling to our place via tube would exit the station (the exit is in the photo above, at the far right), and make two right turns, to head down the street you see in the above photo to the far left. A better picture of the street is below. 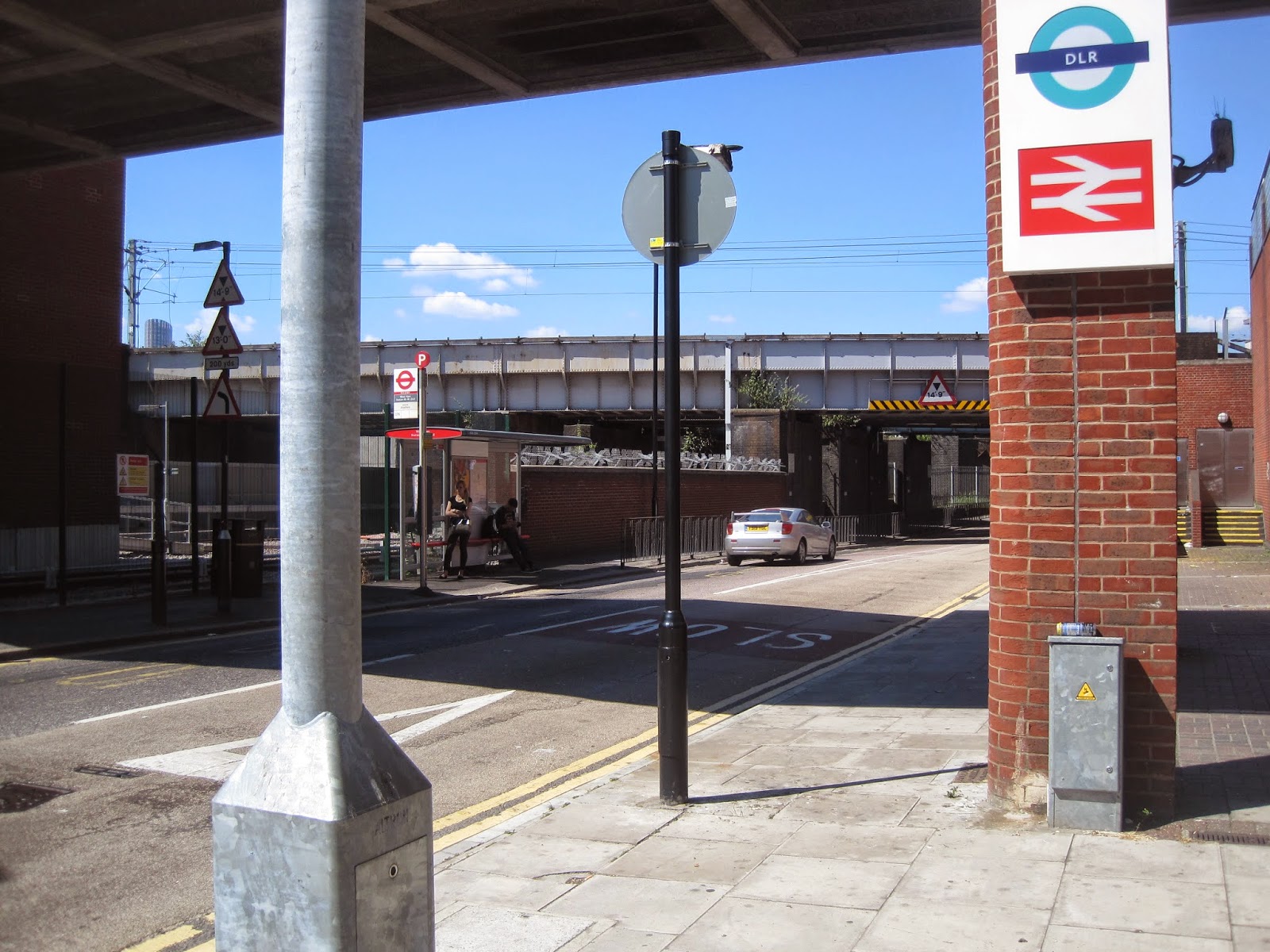 Across from the station were some shops. There wasn't much as far as that goes in this neighborhood, but it's only a seven minute walk from here to Stratford (which is where the London 2012 Olympics were actually held). This is not the Shakespeare Stratford-upon-Avon Stratford, but rather a city east of London that has long since been absorbed into East London. 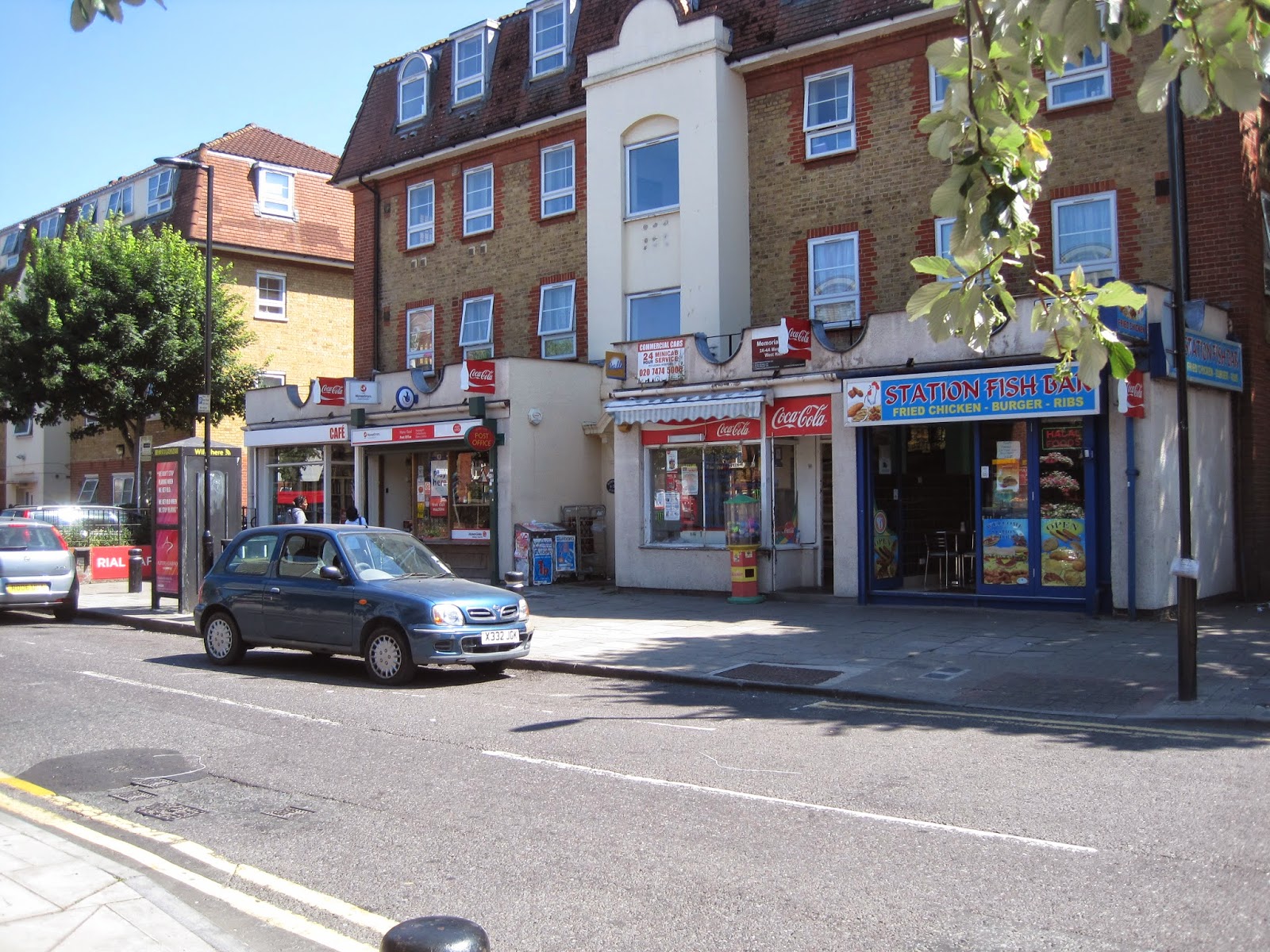 In this little row of shops was a Post Office, and a fish and chips (with Turkish owners who could make a mean hummus wrap for non-fish-eaters like me.)

Nearby was a park with two playgrounds: 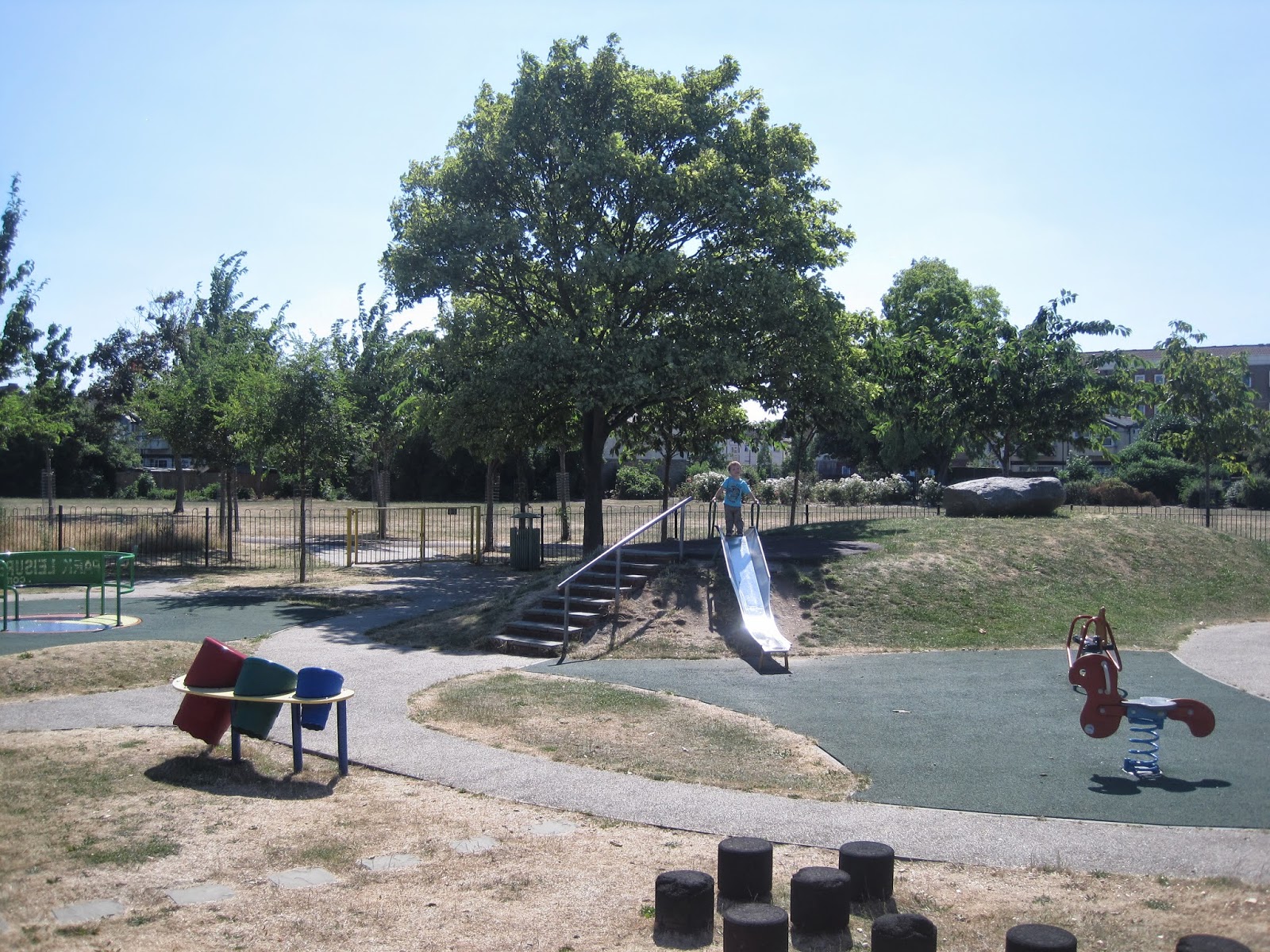 And my older son's preschool (or "nursery" as they call it in the UK. It's part of the public education system and any child 3 or older can attend.) 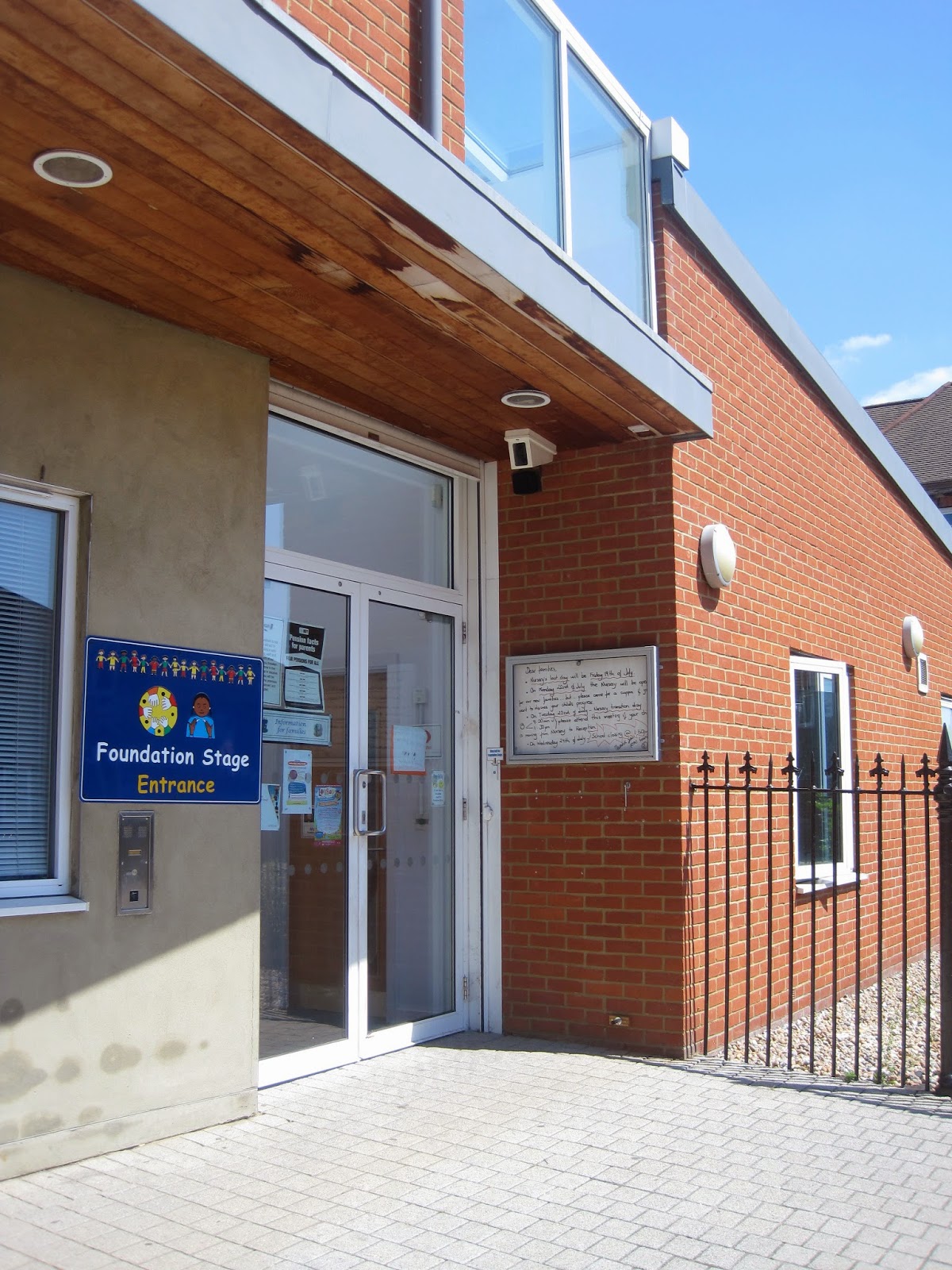 Even though both my husband and I are from the rural mountain west, we found out that we prefer city living. Not having a yard? Love it! Parks where other people do the landscaping and maintenance work well for us. Walking everywhere because it's far more convenient than using a car? Ideal.

Now that we're back in the US, we've just signed a contract to buy a condo in Santa Fe, and it's always interesting what other people have to say about this. Some argue that we'll eventually outgrow it with two growing children, which I suppose is possible, but not a given. We already live in far less space than our critics would ever tolerate, and we're very sensitive to what we actually "need" in terms of housing. Many insist that yardwork and gardening are important hobbies. Pass. Sorry. I live a very full life parenting my children, writing novels, and running my own book formatting business. I have nothing against yardwork per se, but it just isn't an interest of mine. Quite a few people insist that a large house is important for wealth accumulation in the long term. That hasn't worked so well for us; we owned property during the real estate slump and had to unload it at a loss. Real estate may be one way to bulk up assets, but it isn't the only way.

The most common assertion is that we won't have room for all our "stuff". That, in my opinion, sounds FABULOUS. I'm not a packrat by any means, but even I could use less stuff in my life. We'll be moving into our new home very carefully, and everything that doesn't fit, has to go. I really don't think we'll miss it. While living there, we'll have to think hard about what we bring in and likely will have to give something up to make room for it. In my opinion, this is healthy.

We also bought the place at a price that left us room in our budget to do some renovations. Given our life path, my husband and I will be looking at retirement around the time that we're paying for college for our kids. We have no particular budget for a nice home with all the features we want at that time of our life, so we're doing this now, while we've got more years to enjoy it and our kids to share it with. The one thing we've skimped on is guest accommodation - not because we don't like having people visit us, but because it's more floorspace that would lie empty much of the time. We'll have a futon and a lot of interesting things to do outside of our home, for anyone who wants to come see us.