Interview with Jane Lindskold about Wanderings on Writing and other topics 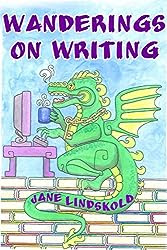 One of the projects I've worked on lately is the formatting of Jane Lindskold's Wanderings on Writing, which has really been an exciting book to work on. It's impossible for me to compose a post that does it justice, but this interview should give you a good taste of 1) the book, and b) the writer who wrote it.

First a brief introduction. Most fantasy and science fiction readers will know your name, but for the rare few who don’t, can you tell us a little about yourself?

Gee… I never know what to say when asked that. I was born in Washington, D.C., which means – according to many of my college classmates, at least, – that I’m not a citizen of the United States, because I wasn’t born in a state.

I attended college at Fordham University in New York, where I had so much fun I took three degrees, all in English, in rapid succession. After that, I took my newly minted Ph.D. off to Lynchburg College in Virginia, where I taught English (both Lit and writing) for five years.

During this time, my life did some somersaults on the personal front and, in 1994, I moved to New Mexico and started writing fulltime. For those who are interested in more, there’s a longer bio on my website www.janelindskold.com.

Your latest book, Wanderings on Writing, contains a wealth of information on writing. Can you give us some history on your Wanderings essays?

In 2010, I started my Wednesday Wanderings blog. I named it that because I was absolutely determined to not feel obligated to write about writing. Strange thing was that I discovered how writing was tangled up in all sorts of interesting ways with most aspects of my life.

Various people began to tell me I should collect some of these pieces into a book on writing. I did.

I love your introduction, in which you talk about “forging the golden key.” So many people like to look for quick fixes and “secrets to success” and such, whereas I think you give an aspiring writer a very honest, and ultimately very useful answer to “what’s the secret to success?” Can you give everyone an idea of what the golden key is and what goes into forging it?

Sure, but I need to take a few steps backward to do this. I’ve seen so many books that promise instant bestsellerdom. This tends to make me very angry because – although this happens occasionally – the more usual reality is that there is no quick and easy formula to success.

If there was, everyone would follow it and then – if you think about it – becoming a bestseller would be even more impossible since this ranking is based on lists, not (as with music) on numbers of copies sold. Then, too, I find myself wondering why – if these people have the formula to write bestsellers – I haven’t heard of any of them.

When I resolved to write a book on writing, I wanted to make sure I wasn’t offering any false promises of this sort. Wanderings on Writing is full of examples, advice, and suggestions. Readers are invited to take what works for them, adapt ideas, and, in this way, forge their own “Golden Key” to success.

I even encourage people to disagree with my approach – as long as that disagreement leads them to creating an approach that will work for them.

When I formatted this book, you had me do things a little bit differently. You had me put all the essays one right after another without the formal chapter page breaks. How do you feel this will change the way a reader reads this book vs. one with the traditional breaks?

The essays in Wanderings on Writing are short, in part because they evolved from blog entries, in part because I wanted them to be the sort of thing someone could read quickly, then go on to another or stop and think.

I wanted the format to encourage this. I think of it as the “bowl of mixed nuts” structure. You start out to read just one, then try another and another…

Which have been your favorite resources on writing and helping you forge your golden key?

As I mentioned above, I have a Ph.D. in Literature. Most people assume this helped me to become a writer. Actually, it proved to be more a hindrance. The things that English professors love – ambivalent endings, layers of symbolism, complex and contradictory images – are things that drive most “real” readers nuts. This is one reason that even English majors don’t tend to curl up and read “literature” on their off time.

Therefore, one of my personal journeys as a writer was learning how to avoid these traps – while still feeling free to be “artistic” and “literary” if it suited a story. My first editor, John R. Douglas, provided me with a great deal of help on writing good endings. I talk about that journey in Wanderings on Writing.

Roger Zelazny and I became friends right as I finished graduate school. Since I completed my degrees by full immersion in the process, when I was finished, I had all this free time. I resolved to fill that time with fiction writing, before it got eaten up by other things. Getting to know Roger at exactly that time was wonderful for me. The letters we exchanged for the next several years often were full of chatter about writing.

This discussion was intensified when I wrote a literary biography of Roger for Twain Press, and needed to ask him a lot of specific questions about how and why he wrote what he did. Roger never tried to teach me to write, because he said that he thought I already had what it took, but our chats gave me a lot of to think about.

Here’s an example. Roger loved allusions, but he said that a story had to work even for those who didn’t “get” a single one of the allusions – but that for those who did there would be an added dimension or richness.

I have faithfully adhered to that in my own writing.

We have to talk about the gorgeous cover art. I had the privilege of laying out the cover, but you had this striking image done especially for the book. Can you tell everyone a bit about the artist and how she came up with the dragon at a computer?

I’ve known Tori Hansen, who did the cover art, since she was fifteen and she was a good artist then. Over the years, as she has pursued various adventures (she’s currently a Ph.D. student in Biology), she has never given up drawing and painting.

I wanted a different sort of cover for Wanderings on Writing. So many books on writing have the same sort of cover: book, pen, computer, whatever, all very grim and serious. I wanted something that would do two things: 1) capture the joy and whimsy in the process 2) hint that genre fiction was not “outlawed” in this book.

Although a wolf is more or less my “totem,” a dragon speaks to Fantasy/SF. I gave Tori a very, very rough (and truly horrible) sketch of my concept of dragon working on a computer. Tori saw a Mayan flavor and took the art in that direction. The “stone wall” the dragon is perched on, by the by, is made up of individual books…

While you’ve been putting together Wanderings on Writing, you’ve also been hard at work on other projects. I know your novel, Artemis Awakening, has just come out. Can you tell everyone a little bit about this one?

Artemis is the name of a planet, lost to mainstream civilization for over 500 years. When archeologist and historian Griffin Dane locates it, his shuttle suffers an accident that leads to a crash. He is rescued by Adara the Huntress and her puma demiurge, Sand Shadow…

Because this is one of my books, nothing goes like you might expect. Griffin’s simple goal – get off planet – leads to revelations that no one, not even the locals, expect.

When started reading SF/F, there were many “planetary adventure” books. (Think Andre Norton, Poul Andersen, Marian Zimmer Bradley, Larry Niven, Anne McCaffery.) Lately, most of what I see on the shelves are military-oriented, dystopian, or grim. I wanted to write a book that, while having some serious themes, wouldn’t be embarrassed to include the Sense of Wonder stuff I’ve been missing.

Animals often feature prominently in your work. I was trying to think of one of your recent books without a strong animal character, and I thought Child of a Rainless Year might qualify, but no, even that one has Blanco, a small character with big personality. People who know you know how much you love animals, can you share a little about what it is that inspires you to write about them?

I guess what surprises me is that more people don’t include animals in their books. Humans are really only a very small part of the puzzle that is life. I like writing animals that are animals, not symbols for human traits or allegories or fables. I also enjoy switching my brain so that I can see from the perspective of the “other.”

Firekeeper, who is probably my most popular character, is completely insane if viewed as a human. However, she’s very sane as a wolf.

Your mention of Child of a Rainless Year reminded me of one of my favorite reader comments about that book. My friend Yvonne Coats called me when she finished. After saying various nice things, she ended, “But I had to laugh. There at the end, you make sure we know the horse is safe. That’s Jane. She’ll put humans through all sorts of things, but she lets us know the horse is okay.”

And that’s true. This isn’t to say that bad things don’t sometimes happen to animals in my books, but these will never be the gratuitous “animals die or suffer to be object lessons for humans” that so often happen in “animal books” – especially, weirdly, animal books written for children.

You and I also share a table of contents in S.M. Stirling’s upcoming Change anthology. Can you give everyone a brief synopsis of your story in this collection of post-apocalyptic stories?

My story is called “The Hermit and the Jackalopes.” It’s set some years post-Change, in the “badlands” – or el malpais – area of New Mexico. It’s about Brett Hawke, a young man who retreats from what’s left of society because he’s traumatized by the sheer amount of death following the change.

And not just human death… One thing that struck me when I started thinking about the post-Change world was how very many animals, especially pets, would die. Ugly.

I didn’t want to write about this, though… Too grim. Instead, I wrote about events that lead to my hermit beginning to interact with the outer world again.

Yeah, okay, I want to read that story right now! Jane and I will be publicizing Wanderings on Writing over the next several weeks, so watch this space for fun stuff like giveaways. Meanwhile, a huge thank you to Jane for this interview, and for the opportunity to help put this one-of-a-kind book together.
Posted by Emily Mah at 10:31 PM