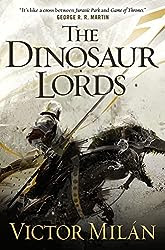 This week I've posted my recent interview of Victor Milan on Black Gate. Vic was kind enough to sit down with me to talk about his new release The Dinosaur Lords, which I had the pleasure of reading as he workshopped it through our writers group. George RR Martin calls it "Game of Thrones meets Jurassic Park," and that's a pretty good description.

Take a lost Earth colony which was seeded with dinosaurs, add some feudalism, and then toss in a dash of ancient religion proving to be shockingly real, and you've got The Dinosaur Lords. The book also has a lot of knights riding dinosaurs, and honestly, can you get cooler than that?

Check out our interview, and check out Vic's latest book!


Here's your Timestamp Table of Contents:


We begin with an introduction of Victor Milan (http://www.victormilan.com) and his newest releases, his short story in The Change: Tales of Downfall and Rebirth, and more importantly, his novel, The Dinosaur Lords.

We are in Page One Bookstore: http://www.page1book.com/ an independent bookstore that is very supportive of the author community.


1:05 An overview of The Dinosaur Lords, "Game of Thrones meets Jurassic Park" - George RR Martin. First an overview of the world, Paradise.

3:38 We discuss the religion of Paradise, and the spiritual event that kicks off the plot.

6:15 How fantasy and science fiction blend in this series.

7:11 Vic introduces a few individual dinosaurs (some of the best characters in my opinion) and outlines his depiction of dinosaurs in general.

9:52 The political situation on Paradise.

13:28 Vic outlines his 31 year long career and lists off several of his pen names.

14:43 We discuss writing under house names and doing work for hire.

18:12 A summary of books under his own name and the early books he wrote.

22:40 Vic describes the process of relaunching his career of writing under his own name.

24:30 He outlines the process of selling The Dinosaur Lords books to Tor and having it edited.

26:30 Summing up The Dinosaur Lords one more time, including a discussion of a dinosaur with metallic paint.

I live on Jupiter with my cats and a cat-loving dog named Emma. I serve as MC for Life for Archon’s unequalled Masquerade, as well as, apparently, for our fine home-grown con Bubonicon. I love reading, birding, games, recumbent cycling, firearms, hanging with friends, and walking Emma along the ancient irrigation ditches in Albuquerque’s scenic North Valley.

I’ve published over 100 novels, including the Prometheus Award-winning The Cybernetic Samurai, its sequel Cybernetic Shogun, CLD: Collective Landing Detachment, and numerous short stories. I’m a founding member of the Wild Cards shared-world project, which has a movie in the works.

My work appearing in 2015 includes the novella “The Seeker: A Poison in the Blood,” in S. M. Stirling’s anthology The Change: Tales of Downfall and Rebirth (June 15th), based on his best-selling Emberverse series, and what is as of now the last-ever novel in the Deathlands action/adventure series, currently entitled Wrath Child.

The big news by far is that my long-awaited (not least by me) novel The Dinosaur Lords, first volume of an epic fantasy cycle, will be released by Tor on July 28th, 2015. It’s already attracting a great deal of buzz. I’m excited about it, to say the least.

And thanks to all my friends and fans, whose love and support have literally kept me alive.