Shanghai Steam is launched and for sale 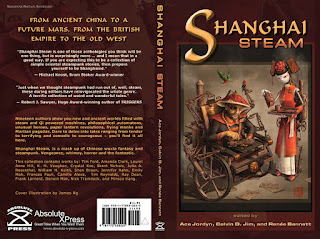 Here's the cover for the Shanghai Steam anthology that I am in. It was launched last weekend at World Fantasy, but I've waited until after the hurricane and that election thingy we just had to post about it.

And here are the details from the anthology's site:


FROM ANCIENT CHINA TO A
FUTURE MARS. FROM THE BRITISH
EMPIRE TO THE OLD WEST

“Shanghai Steam is one of those anthologies you think will be one thing, but is surprisingly more…and I mean that in a good way. If you are expecting this to be a collection of simple oriental steampunk stories, then prepare yourself to be Shanghaied.” — Bram Stoker Award-winner, Michael Knost.

“Just when we thought steampunk had run out of, well, steam, these daring editors have reinvigorated the whole genre.  A terrific collections of weird and wonderful tales.” – Robert J. Sawyer, Hugo Award-winning author of TRIGGERS.

Shanghai Steam, is a mashup of Chinese wuxia fantasy and steampunk. Vengeance, whimsy, horror and the fantastic.