Win a SIGNED copy of Rewind, by Terry England

You have to be a little bit in the know to recognize this title. Terry England was a fellow member of our writer's group, Critical Mass, so like me he workshopped with George RR Martin, SM Stirling, Walter Jon Williams, Melinda Snodgrass, and other well known authors, and Rewind was originally an entry for a writing contest. One of the judges liked it so much that he had his publisher buy it.

Terry's also got a more recent release, The Tyranny of Heroes, and at least one other novel I've had the privilege of reading. Fellow New Mexicans may also recognize his name from The New Mexican newspaper, where he was a reporter for many, many years. 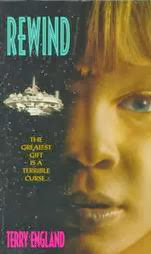 In the early years of the third millennium, an alien ship lands in the New Mexico desert. Its occupants are a mysterious, yet peaceful, life form known as the Holn. After a six-year stay, during which thousands of curious humans flock from all over the world to visit the spacecraft- turned- museum, the Holn depart suddenly, leaving behind 17 teens who had, until that morning when they entered the alien craft, been adults. Now, with complete memories of their former adult lives, they struggle to come to terms with this unasked-for "gift".

a Rafflecopter giveaway
Posted by Emily Mah at 12:49 AM