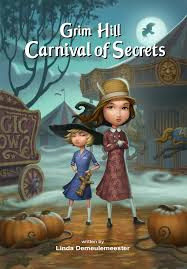 Linda Demeulemeester's next book from the Grim Hill series is out! I've read all of these, of course. They're just fantastic. I know they're written for a middle grade audience, but they transcend that.

Set in a fictional North American town, these books begin with the protagonist, Cat, moving in and trying to get her bearings at her new school. Unbeknownst to most of the townsfolk, there are fairies living under the hill overlooking said town, and they aren't the cute, Tinkerbell kind. They are straight out of Celtic lore. Each book is driven by one of Cat's run ins with their magic and each time the story twists and turns in unexpected ways. My favorite feature of Linda's writing is how she portrays important life lessons without being didactic or dogmatic. Cat's not perfect, and she suffers the consequences of this and has to grow as a result. Now the synopsis of this book:

In book six of the award winning and best selling Grim Hill series, is the thrilling Grim Hill climax. Cat has lost everything she holds dear. Sookie has gone over to dark magic and is a diabolical threat. A sinister carnival has crept into town and has everyone under its thrall. Only Cat’s fairy friend Lea thinks there might be a sliver of hope that all the harm can be undone. But even she quakes at the danger. Still, Cat is determined to do whatever it takes, except this time even the gang isn’t prepared for the most harrowing adventure of all. Has Cat gone too far?


As is often the case, I know the author (but I know a ton of authors, so I can't help it if some of them are really, really good ones). Linda and I were Clarion West classmates back in 2001 and the very first week, one of my short stories and her short story were used for the first critique session. Octavia Butler was our teacher and my story was deemed "not really a story" (which was correct, it was a mess) and hers was deemed "ready to sell." Octavia Butler knew a few things about writing and selling stories.

Once we graduated the program, Linda was one of the first to land a novel contract, and she's been writing the Grim Hill novels ever since. They've been in and out of development as an animated series, and I do hope that project gets a greenlight someday soon. Meanwhile, I've gone and bought this book. You should too! Here is the link: