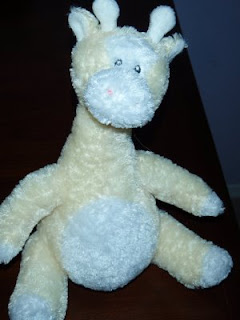 I have a lot of thank you notes to write, and this one is to someone whose internet connection speed is unknown to me. Since this includes an image, I'll post it here rather than risk having them download the thing over dialup. There's some backstory I should fill in first.

About a decade ago, I gave a presentation for the Girl Scouts and there was a girl in the audience named Katie. I guess I made an impression on her (I'm embarrassed to say that I don't remember what the presentation was about - I gave a lot when I was a teen/early twenties). She named her stuffed giraffe after me and took Emily the giraffe on many adventures. I guess Emily's rather beat up now and may not much resemble a giraffe anymore (my favorite toy from that age sure doesn't look like a hippo.)

I aged, did less and less with the Girl Scouts, and didn't see Katie again for a long time. Only Katie had a great uncle named Jack. Williamson. The SFWA Grand Master for whom ENMU holds a Lectureship every year (and yes, I still need to do my review of this year's. It's been crazy what with the new baby and taking him to four states before he's two months old and all that.) When I was at my first Williamson Lectureship, Katie's mother, Betty, told me about my namesake. Needless to say I was touched, and more than a little dumbfounded. Katie herself is a young writer who will probably be accepting Hugos while I still work on getting personalized rejection letters from the major markets.

In any case, when my son was given a stuffed giraffe, I took the liberty of naming it Katie. It seemed only fitting. I hope it reminds Katie of how flattered I was to have my little namesake accompany her through her early life.
Posted by Emily Mah at 10:36 PM