I've been practicing more cover design in an attempt to be able to create nice covers for my short stories, and I've learned and re-learned some lessons. When I set out to design a cover for my short story, Across the Sea, I first chose a beautiful image of the Pacific Northwestern coast, which is where the story is set. I found a nice Asian font to show that the story has a Chinese element to it, and I could not get the cover to work. After a few hours of fussing with the title and the fonts, I finally went back to the drawing board and got another image. The result was much, much better: 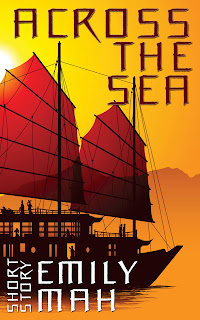 Even though the only Chinese junk in that story is an ancient wreck, this picture was a lot more evocative than a pretty landscape. I try to remind myself that the cover is all about the image and title. From this cover you can tell that it's about an ocean crossing and involves Chinese people. I can't get everything in. There's nothing about the Athabaskan woman who is my main character or the archeological digs or any of that, but this image I hope gets attention without being misleading.

My next story was my cowrite with Ty Franck, Avatar. This one seemed simple enough. The main character is a woman who is the Avatar of Chaos. I always thought eye contact was a good way to grab attention for a cover, so that's what I used: 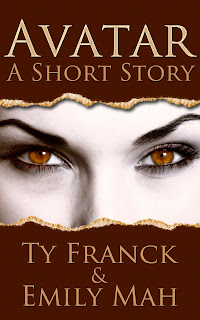 We'll see if Ty likes it. He has to approve it, of course. The torn edges and all that I learned from my days as a digital scrapbooker. Nice how old skills come in handy!

The final cover, I took a chance on. Combining images is a more advanced skill, and I'd been warned that nine times out of ten it looks awful and amateurish. I couldn't find one image that captured the spirit of my story, Coyote Discovers Mars, though, so I took a deep breath, got the two images, and put them together. The result: 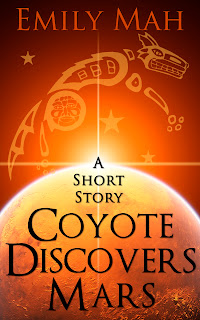 This one's my favorite of the three, perhaps because I took a risk and tried something a little more difficult. I think it captures the idea of the story well; which is a retelling of the Native American Coyote Stories in a science fiction setting. So far this is the frontrunner for the cover of my collection, once I have my short stories all uploaded (which will be months from now).

Perhaps not perfect, but I feel like I'm learning and I'm still having fun :-)
Posted by Emily Mah at 12:18 PM