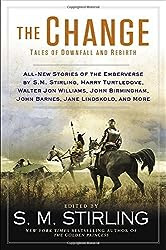 The Change: Tales of Downfall and Rebirth is out now!

This anthology, edited by S.M. Stirling (the creator of the Emberverse, where all these stories take place) features me and a lot of friends of mine, including M.T. Reiten, Jane Lindskold, Lauren Teffeau, John Jos. Miller, Walter Jon Williams, Victor Milan, and Terry England.

Does this mean I can't be objective about the quality of the stories?

I probably could be if I really wanted to, but I don't feel particularly motivated to do so. Instead I'll point out that S.M. Stirling is a discerning editor and he decided which stories would be included in this anthology.

My story, A Missed Connection, takes place on the campus of the University of Utah at the moment The Change occurs. Marc Branson is a recently returned Mormon missionary who thinks his biggest problem is avoiding his clingy ex-girlfriend, Chrissy. Fortunately, his online flirtation with Angela looks like it's about to bear fruit. The only problem? She lives in Chile, and the Internet just went down.

The fictionalized version of me has a cameo in this one, too (because I become the Premier of Western Canada in this universe - and if people feel like I point that out too often, it's because I much prefer that to what would actually happen to me after The Change. I don't think I'd make it a week...)